Since the regime of Deng Xiaoping, the Chinese Communist Party has used Western capital and know-how to turn the People’s Republic of China into an economic superpower. The economic rise of China has been viewed favourably in the West because it was assumed that prosperity would foster a middle class and democracy.

The massacre of Chinese young people in Tiananmen Square in 1989, authorised by Deng himself, should have convinced even the most optimistic westerners that a ‘Chinese glasnost’ is wishful thinking. Instead, western business leaders, politicians, academics, and media personalities, perpetuated the myth that China is becoming an open and free society.

Today, few deny that China’s Communist Party runs a repressive, totalitarian, one-party State. All-powerful Xi Jinping has consolidated his grip on the Party, which has tightened its grip on the Chinese people. A sophisticated cyber-spying system makes dissent more difficult and dangerous than at the time of Tiananmen Square. The Party has revived the personality cult of Mao and, significantly, added the new cult of Xi Jinping.

Western friends of the Chinese Communists trimmed their sails in response to these developments. Now they tell us that although democracy is a long way off in China, and might never even happen, this is acceptable because only a totalitarian state can cope with the challenges facing China.

Especially worrying for its neighbours, China is arming at a rapid pace. The Party is fanning the flames of xenophobic nationalism at home, and abroad is interfering in the national life of sovereign nations, particularly those of the Asia-Pacific region.

Understandably, Australians are growing uneasy about the Communist Party’s intentions. An uncritical, fawning, friendship for Beijing has become suspect in the eyes of public opinion.

Why Australians must be concerned about China2019-09-032019-10-02https://www.australiachinawatch.org.au/wp-content/uploads/2019/09/logo_large.jpgAustralia China Watchhttps://www.australiachinawatch.org.au/wp-content/uploads/2019/09/australia-china.jpg200px200px
Follow us on Facebook
Recent Posts
Copyright All Rights Reserved © 2019 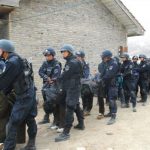